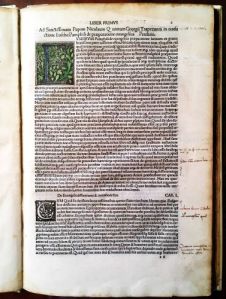 1. EUSEBIUS OF CAESAREA De evangelica praeparatione. Venice, [Bartholomaeus de Zanis], 10 November 1500. Translated from the Greek by Georgius Trapezuntius. Folio (31,3 x 20,7 cm). Modern vellum, flyleaves renewed, last blank missing. Bookplate of the Bibliotheca Philosophica Hermetica. 65 leaves. With large and small woodcut initials, of which the first has been colored. With owner’s mark on the title page, many contemporary marginalia, pointing fingers and underlining in various hands and colors, and on the colophon some page owner’s marks and the handwritten date 1515. Some creasing.
€ 5500
* A charming incunable, one of the last that was published. Funny small woodcut initials decorated with rabbits, winged mice, flowers and birds, but also renaissance men and monsters. Sometimes an inverted A has been used as a V! Goff E 123.

2. FERRARIENSIS, Johannes De Coelesti vita. Venice, Matteo Capcasa (di Codeca), per Hieronymus Blondus, 19 December, 1494. 30,6 x 22,1 cm. Bound in morocco-backed boards around 1800-1850, with title label, a bit worn at the sides. Bookplate of Thomas South and of the BPhH. 72 leaves. Title printed in RED, with printer’s mark and decorated woodcut initials. Handwritten notes on title page and flyleaves.
€ 5750
* Broad-margined theological work. With a large metalcut initial ‘N’ and 3 large woodcut initials (C, M and B) plus numerous smaller woodcut or metalcut initials. Title page printed in red with a list of the essays contained in this book and a phoenix. Goff J313.

3. (INCUNABLE). Hugo de SANCTO CARO Postilla super psalterium. Venice, Johannes & Gregorius de Gregoriis, de Forlivio, for Stephanus & Bernardinus de Nallis, November 12, 1496. 33 x 21 x 8 cm. Folio. 17 numberless, 389 numbered leaves, totaling 406 (of 408, without the first and last blank). Slightly later blindstamped leather over wooden covers with remains of clasps. The lower cover is in fact an upper cover from a different book! It carries a date: 1622. Bookplate and blindstamps of Wigan Free Public Library. Inside upper cover a tiny label of bookseller and bookbinder George Gregory of Bath, Bookseller to Her Majesty Queen Alexandra, dating from 1901-1922. A penciled price of 5 guineas may date to the same period. Inside the book, several handwritten owner’s marks refer to the Benedictine abbey of Santa Maria in Florence, called La Badia Fiorentina, with place number (?) 444.
First edition with leaf 1 in uncorrected first version: the three lines printed in red designate the wrong author (Alexander of Ales). In a later version these lines were omitted. Leaf a8 has been reset later, as comparison with the online BSB copy makes clear. Goff H-530.
On the incipit, three lines have been printed in red containing the author and title. However, the author’s name was crossed through with a line of ink, because of a printer’s mistake. With attractive larger and smaller woodcut initials.
Upper and lower cover of the sturdy binding a bit worn. Spine renewed (early 20th cent.?). Some wormholes in last text pages. A little browned in places, but for the most part remarkably unblemished.
€ 4850
* Extensive commentary about the psalms, on the whole this is a remarkably unblemished book with a colorful provenance: a venerable Florentine abbey until 1810, a bookseller who once laced the shoes of Her Majesty Queen Alexandra (as his obituary states…) and the Free Public Library of Wigan, which disposed of its most ancient books in 2012.

5. LACTANTIUS, Lucius Caecilius Firmianus Opera. De divinis institutionibus libri septem; De Ira dei; et Opificio hominis cum Epithomon eiusdem. Venice, Vincentius Benalius, 22 march 1493. 30 x 21 cm. Early 19th century vellum with old marks of the University of Leiden (“ACAD/ LVGD”). 139 leaves (first blank missing). Capital spaces with guide letters. Roman type with some sprinklings of Greek. At the beginning a handwritten register of words for this Lactantius. At the end part of a written register extracted from Cassius Dio. At the first text page a stamp of Leiden University signifying that the book was sold by Leiden University, signed by  W.N. du Rieu, Librarian 1880-1897. Marginal notes in old hands (mainly one hand, the same as the author of the registers). Some old page numbers partly cut off, in the beginning some stains.
€ 4500
* Austerely elegant incunable, discarded in the 19th century from Leiden University, with alphabetical registers and learned notes (handwritten) probably from the 16th century. 135 complete copies in ISTC. Goff L-11. 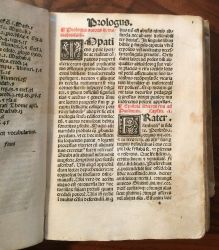 6. MARCHESINUS, Johannes Mamotrectus super bibliam. Venice, Simon Bevilaqua, 12 July 1492. 8vo (16,2 x 12,2 cm.) Old vellum with written spine title. 273 leaves. Title page (with just the word ‘Mamotrectus’) in photocopy. At the end, part of a benediction leaflet was used to fasten the book block to its binding. Three more identical leaflets plus four strips of a woodcut decoration were used to fill up the binding. Some inscriptions at the beginning and the end (a.o. a drawing of a flower vase on one of the last pages).
€ 1950
* Although soiled and a bit damaged, this is an unpolished, authentic incunable. This is the 21st of the 23 incunable editions of this text, usually called ‘Mammotrectus super bibliam’, however, in this book consistently spelled with one M: Mamotrectus, without ‘super Bibliam’. The meaning of this curious title is ‘nourisher on the Bible’, strongly suggesting ‘the Bible’s Breast Milk’. It’s a handbook explaining words and notions of the Bible and other important texts, such as the letters of Saint Jerome to Paulinus and Desiderius, but also about clothes of priests, Latin accents and other practical subjects. The Mammotrectus would be useful if you were preparing a sermon or some other priestly act. In the colophon another version of the title is used: Mamotrectus tam bibliae quam aliorum plurimorum librorum, ‘Mamotrectus from the Bible as well as from many other books’. Goff M252; BSB M-167. Extensive description on request (and in our catalogue 64). = Inkunabel Venedig 1492.

7. PSEUDO-BONAVENTURA Meditationes vitae Christi, (or in full:) Meditationes devotissime totius vite domini nostri Jesu Christi. Venice, Manfredus de Bonellis, de Monteferrato, December 14, 1497. With at the end two poems: Bonaventura, Lignum vitae; and Johannes Peckham, Canticum de sanctissimo nomine Jesu Christi. 15,1 x 10,8 cm. Overlapping vellum. 66 leaves, the last blank (with mistakes in the page numbering). Title page with a woodcut of the Pietà on recto and another of the Crucifixion on verso. Text printed in two columns. One 5-line woodcut capital and numerous 2-line capitals. Reprint of a very popular book written by an unknown Franciscan. Large bookplate of Manfred Mehl, elegant bookplate (embossed, gilt, in colors) of the Bibliotheca Philosophica Hermetica. A little soiling and browning, vague light brown stain on title page, marginal inkstain at the end.
€ 4500
* Meditations about the life of Christ. Long attributed to St. Bonaventura. Second edition with illustrations. Goff B 899. 42 complete copies in libraries, but not in Belgium or the Netherlands (only BPH is mentioned, which is this copy).

8. SENECA, Lucius Annaeus Opera philosophica. Epistolae. Venice, Bernardinus de Choris, de Cremona and Simon the Luere, 1490. Folio (33 x 23 cm). 19th-century vellum-backed boards with 4 ribs and 2 title labels. 216 leaves. 62-63 lines plus header. Roman font. Space for capitals, with guide letters. Binding in good condition. Inscription on the side of the book block (‘Opera Seneci’, sic). 20th-century bookplate of Georg Bachem. Name (16th century, hard to read) on title page. Marginal notes in Latin (some of these partly cut off). A few worm holes at the end. Good copy with large margins.
€ 3950
Early collected edition of the philosophical works and letters, as usual with the writings of the older and the younger Seneca mixed up indiscriminately. Notes on first endpaper about a previous owner, the lawyer Conrad Cohn (1901-1942), who died in Oranienburg (or Mauthausen, according to Wikipedia), with commentary on Breslauer, Venator and other incunabl e sellers. Goff S-370. 135 complete copies in libraries, one in Belgium (Brussels KB) and one in the Netherlands (Leiden). Attractive book in decorative binding, excellent condition.

11. INCUNABULA IN ROMANIA Catalogul incunabulelor. Cluj-Napoca, Editura Dacia, 1979. Gilt cloth with dust jacket. 124 p. Illustrated. In Rumanian. Excellent condition.
€ 25
* Detailed and illustrated descriptions of 84 incunables of the Central University Library of Cluj in Romania and 5 others from the National Museum of Romanian History in Bucharest in alphabetical order. = Inkunabel-Katalog Rumänien.